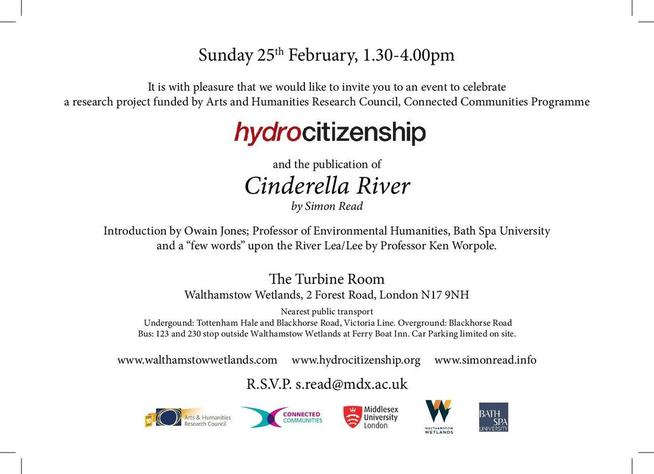 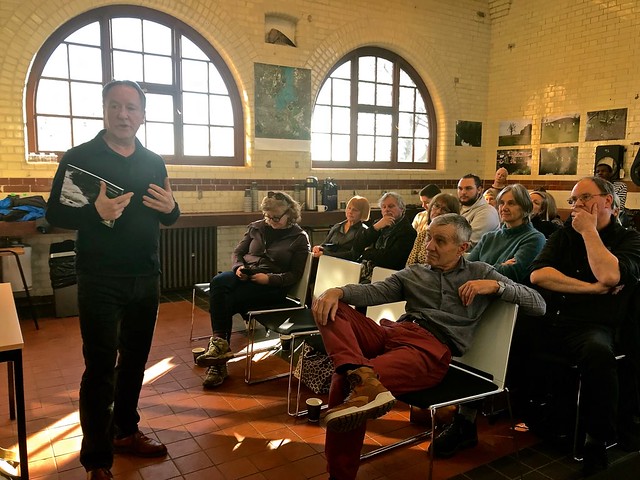 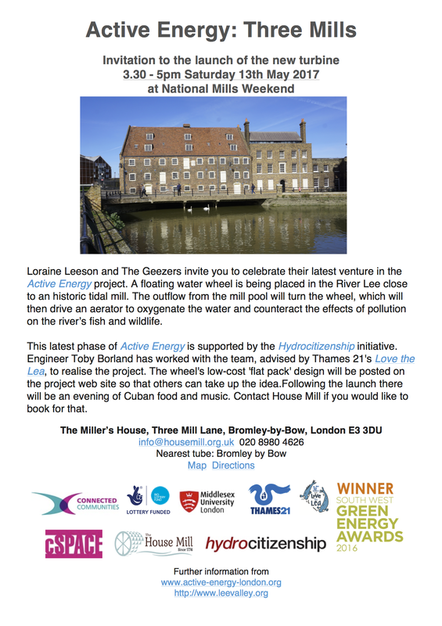 Active Energy water wheel was launched at Three Mills heritage site on the 13th of May.

Jane Caldwell, Chief Executive at Age UK East London made the opening address followed by artist Loraine Leeson and Toby Borland, engineer, who outlined the trajectory of the project and its importance of community input.

Professor Graeme Evans, Middlesex University described the involvement of the project in Hydrocitizenship.

​Finally, the Geezers, with Ray Gipson described their longstanding struggle to bring renewable energy in to their community and their involvement in Active Energy project. ​ 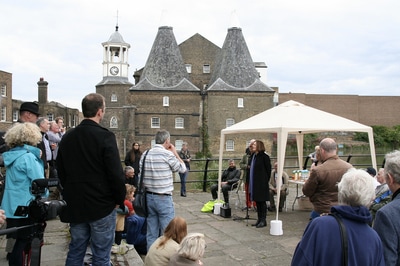 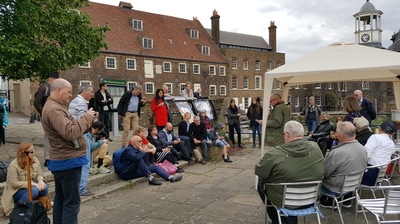 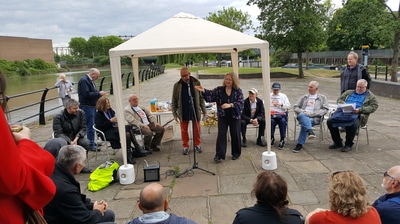 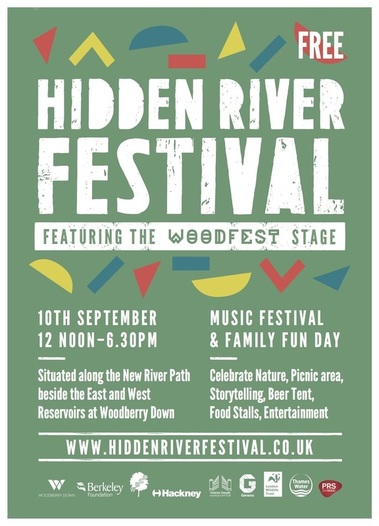 ​
The Hidden River Festival is an free annual waterside festival, giving local people a chance to enjoy a mix of live music, food stalls, art and fun for all the family with the aim of connecting the communities living alongside the New River, which runs through Hackney and Haringey.

The New River is the inspiration for the festival, but it is neither new nor a river. It was built over 400 years ago to bring Londoners fresh water from the springs of Hertfordshire and provides a beautiful green way through this part of the city, which Manor House Development Trust invites people to come and celebrate every year to discover this unexplored oasis and wildlife haven.

The festival launched with the 2013 festival held in Finsbury Park with 2,000 people in attendance with comedy, swing dancing and a specially commissioned New River Cantata choir.  The 2014 festival took place at the West Reservoir Centre.

The Hidden River Festival 2016 was situated along the New River Path beside the East and West Reservoirs at Woodberry Down on the 10th of September. Rainy weather didn’t stop visitors to enjoy a day of activities, music, food and many other interesting stalls.

Lee Valley Hydrocitizenship held a cultural mapping stall at the festival and engaged with the local people about their views and perceptions of this rapid changing neighbourhood. 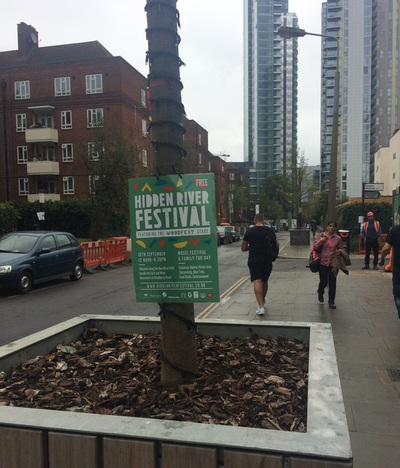 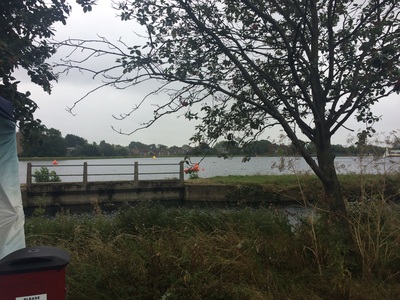 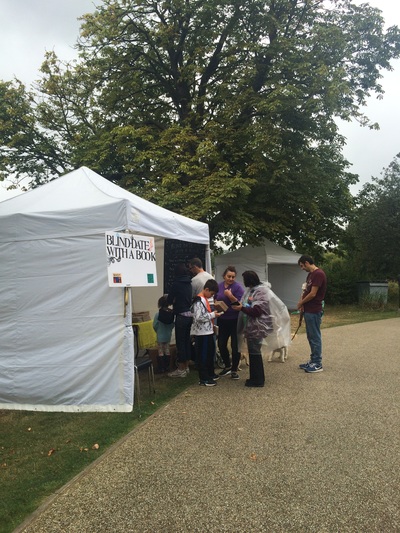 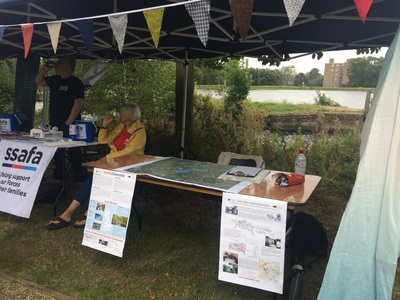 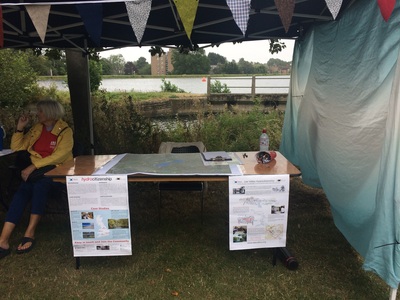 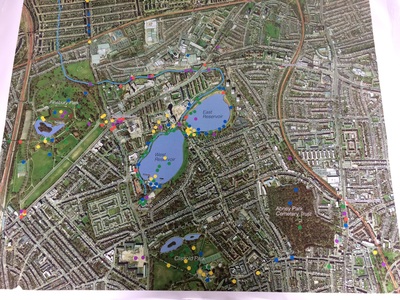 Firs Farm Wetlands is transformed into a vibrant summer community festival with fun, food, music and activities on Saturday, 16 July 2016. The festival was great success thanks to organisers and volunteers. The range of activities and stalls kept the festival ground busy all day long. Lee Valley-Hydrocitizenship team hosted a cultural mapping stall during the festival.

The festival was great success thanks to organisers and volunteers. The range of activities and stalls kept the festival ground busy all day long. Lee Valley-Hydrocitizenship team hosted a cultural mapping stall during the festival. Hydrocitizenship stall was one of the liveliest areas of festival along with London Wildlife Trust, Love the Lea/Thames 21 and Thames Water. More than 20 people took part in the cultural mapping study and shared their experiences and ideas about living around Firs Farm. Thanks to Luciana Alves (PhD student at the Department of Natural Science, Middlesex University) for her help during day.

Also, the Geezers worked with artist Loraine Leeson and engineer Toby Borland in front of House Mill at the Three Mills heritage site to construct a stream wheel for later installation in the Lower Lea. The wheel activated by the outflow of water from the mill and will power an aerator to help oxygenate the water and counteract the effects of pollution on the river’s fish and wildlife.

Lee Valley Hydrocitizenship team has celebrated the World Water Day (22.03.2016) with water and sediment sampling in the Lower Lee with Luciana Alves and Prof. Lian Lundy. 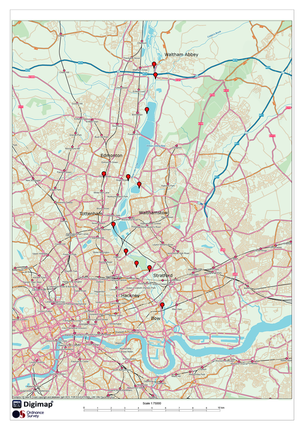 Luciana’s PhD research focuses on the impacts of an urban catchment on water and sediment quality of a receiving river in the case of lower River Lee. While water quality has been the focus of several academic research and EU/national documents, little has been done with regard to sediment quality. River Lee has been subject to increasing urbanisation in the last 100 years and it receives major discharges of treated sewage effluent.


​The research involves a combination of field, laboratory and desk-based studies. Alessandro and I joined Luciana and Lian for the collection of water and sediment samples from 11 sites selected to represent variations in drainage and land use activities. Samples are analysed for heavy metals and persistent organic pollutants.
​We started the day at 8am at the Middlesex University car park and visited all the sampling points by 4pm. Luckily, it was a blue sky, beautiful London day and it was quite pleasant to spend it by the water and nature.

Luciana’s work helps to enhance understanding of the process of pollutant release from sediment to water. The combined output of the this research will inform the development of a GIS-based model to enable stakeholders, e.g. the Environment Agency, to identify and prioritise pollutant sources within a catchment based on their potential to negatively impact on water and sediment quality. 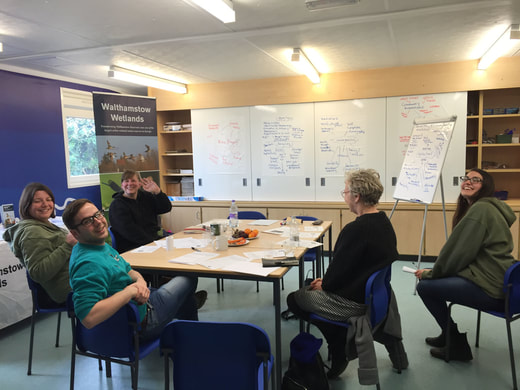 Hydrocitizenship interactive research training session with LWT community engagement officer and volunteers.
​As part of our on-going collaboration with the London Wildlife Trust (LWT) at Walthamstow Wetlands (http://www.walthamstow-wetlands.org.uk/) the Hydrocitizenship team helped out at their Volunteer Roadshow (12th March 2016).
​
It was a really positive day of learning and sharing ideas with the morning involving working with members of the existing community engagement volunteer team to run our interactive research training session. In the afternoon we ran a participatory cultural mapping stall to capture the views of the many prospective volunteers that came along to find out about the project and how they could get involved.
Understanding why current and potential visitors use and value the site is really important to a project like Walthamstow Wetlands and the volunteers will be key to collating that data.  Part of that research process involves the volunteers developing a set of basic research skills around the purpose, approach, ethics, good practice and logistics of visitor surveying. To help build these skills our training session involved a range of interactive exercises including research simulation through role-play. The team got the chance to test out their new skills on Sunday when following a guided walk of the wetlands we worked as a combined research team to survey the visitors. Rachel Smith, Walthamstow Wetlands Engagement Officer, had lovely things to say about our contribution! ‘It is a pleasure to work with the Hydrocitizenship team who contributed hugely to the days’ success through research technique training and cultural mapping with the volunteers’.

​The Redmond Community Centre, Woodberry Down, hosted the WinterFest on Wednesday, 9 December between 4-8pm which included free buffet, music, exhibitions and stalls of different organisations working/interested in the area. The festival run by the Woodberry Down Community Organisation (WDCO), supported by Heritage Lottery funding and attracted over 400 local residents and community members in the neighbourhood. Lee Valley-Hydrocitizenship team hosted a cultural mapping stall during the festival. 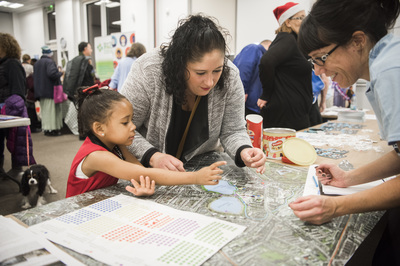 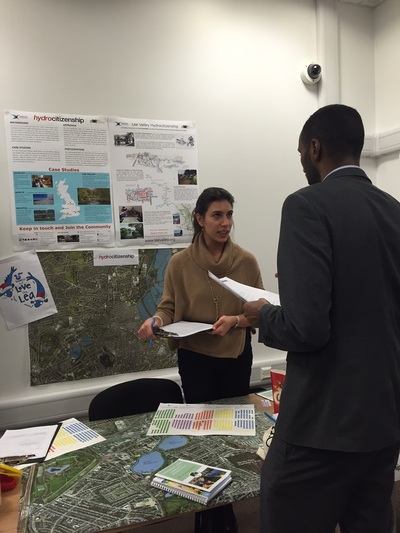 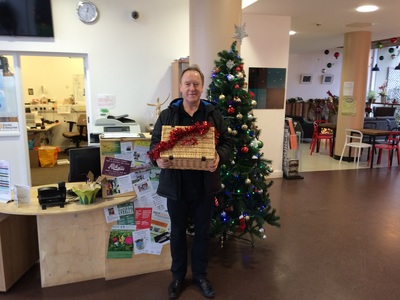 The Hydrocitizenship project has also been published in December Woodberry Down News inviting locals to share their experience and views on water spaces around Woodberry Down. ​ 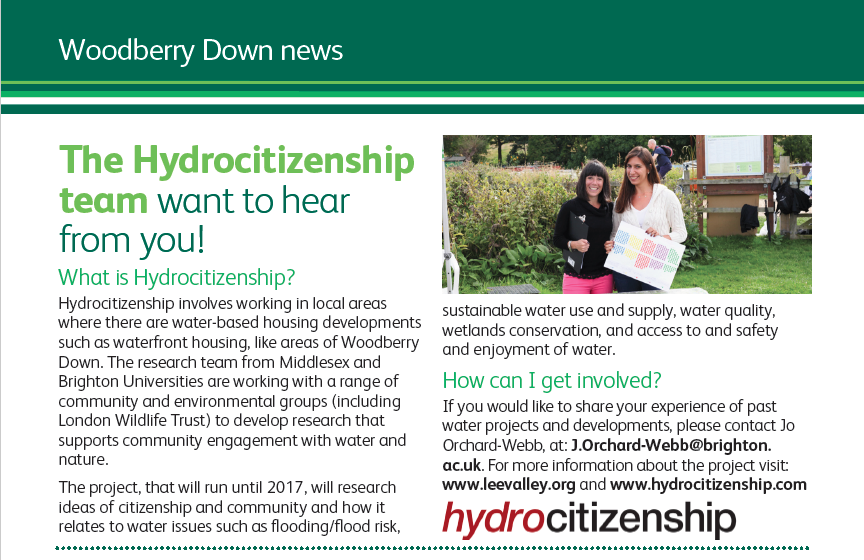 Hydrocitizenship Project celebrated the 10th anniversary festival of AHRC-Connected Communities and London Festival of Architecture at Hackney Wick & Fish Island on the 26-28 June 2015. Diverse events, exhibitions, workshops and talks took place including Middlesex University exhibition of Interior Architecture & Design student schemes at Hub 67, Lee Valley Hydrocitizenship Project cultural mapping outside Hackney Pearl, Creative Factories exhibition at See Studio, Wick Session on community land trust at Stour Space, screening of the Long Good Friday film at the Mother Gallery, DEN-City 1 curated by Rebecca Feiner at Forman's Yard, Open Studios and many more. ​
Over 2000 people visited the Festival area and got involved in different activities during the weekend. A brief visitor survey has been undertaken during the festival weekend. The results show that 37% of the participants were visiting HW&FI area for the first time, 44% visit the area regularly and the rest live/work in HW&FI area. Majority of the participants were in the age group of 25-44. While visitors mainly experienced most of festival activities, Hackney Wicked Open studios, the Architecture Exhibition, DEN-City and the Creative Factories Exhibition were the most visited ones. Majority of the participants have heard about the festival via word of month or festival flyers and posters and 56% mentioned that their experience of the festival was very good.

Hydrocitizenship project outdoor stall was one of the liveliest areas of the festival. Over 40 people took part in the cultural mapping study which aimed to make creative contributions to the ways citizens and communities live with each other and their environment in relation to water. ​

Hub 67 was a focal point for residents, hosting events, classes and community groups in Hackney Wick. Groundwork community team and local residents helped to create small hubs of planting around the building followed by a lovely tea break and delicious cakes. Hydrocitizenship team engaged in planting in/around the hub and engaged with the local community during the event. 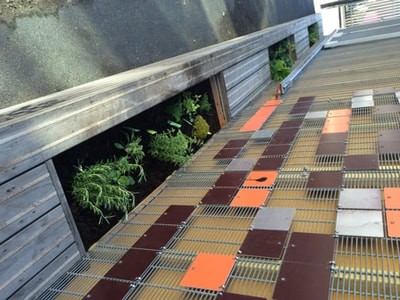 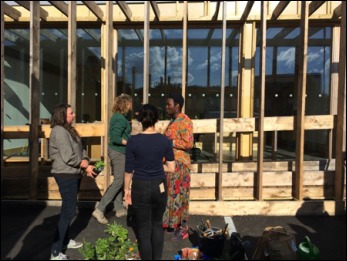 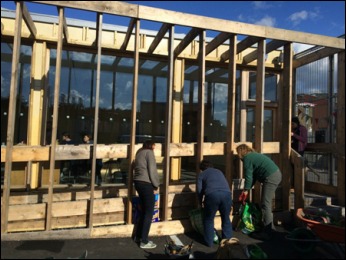 - World Water Day in Lee Valley- Cycle the Historic South of the Park and Beyond, 22 March 2015

Lee Valley Hydrocitizenship team joined the cycle ride event that LVRPA organised on the Wold Water Day, 22nd of March.  The circular 25 mile guided cycle ride in the south of the park and beyond started at WaterWorks and a lunch break lunch break is given at the Thames Barrier Park.  15 cyclists joined the ride from all levels, some of them being members of Edmonton Cycle Club, some never cycled in the area before or some very regular cyclists. ​
There's miles of traffic-free cycling routes across Lee Valley Regional Park covering 10,000 acres in London, Essex and Hertfordshire and cycling is one of the most popular ways of transport as well a s a leisure activity in the area. Engaging with the cyclists through this event was a great opportunity for the Lee Valley Hydrocitizenship team.

At the start of the ride, Ozlem introduced the project to the cyclists and asked them to pay more attention to water during their ride on the day. Ozlem later meet them at the lunch break at the Thames Barrier Park and asked them to fill in a short survey about their reflections of this cycle ride (significant part of the cycle route was either by the canal or River Lee) and the importance of water to them as an urban amenity. On a small note, I must say reaching the Thames Barrier Park via public transport was more complicated then cycling.

A pilot cultural mapping study was undertaken on 13 June at the Cre8 Lifestyle Centre (formerly the Hackney Wick Community Centre) following the Hackney Wick and Fish Island Cultural Interest Group (CIG) monthly meeting. The research team introduced the Cultural Ecosystem Mapping study at the May CIG meeting and invited participants to stay after the 13 June meeting for the mapping study. In total, 7 participants joined the Cultural Ecosystem Mapping pilot study and the meeting last around an hour.

​Participants were asked to identify recreational uses, cultural uses and problem areas. A set of socio-demographic questions was also asked regarding gender, age, home postcode and familiarity with the study area.

The CIG was founded in 2009 to facilitate a permanent, sustainable, creative community in Hackney Wick and Fish Island and particularly to advance the arts and culture. The group meets every 2nd Friday of the month at a rotating venue in Hackney Wick or Fish Island. The meetings are normally attended by 30-40 people, including representatives of arts and cultural and community organisations, schools and other residents (including local ward councillors). Hydrocitizenship team attended these meetings from 2014 to 2017.